A not very brief and personal take on my home town. Locals with more knowledge are welcome to make amendments!

Brighton is often referred to as London-by-Sea, which is slightly patronising, but does accurately describe the peculiar mix of cosmopolitan bohemia and seaside postcard.

Situated on the south coast, it’s been described to me as a town of freelancers, there’s not really a big employer other than American Express and there’s loads of agencies and individuals doing work into London. Allegedly we’re the UK’s digital city, someone should tell my broadband.

You name it we have it.

For more about the city there’s always wikipedia.

Things to see in town

If attendees are staying in Brighton they are mostly in the Ibis. It is right out in front of the station. Only 10 minutes to the sea and less to the venue.

Another decent hotel close to the venue.

Our amazing venue. Next to the Pavilion with some lovely gardens and next to a small museum and art gallery.

We used to have two. Then there was a fire, now there is one. It couldn’t be more ‘English Seaside’ if it tried. Arcades, average pubs, sunburnt tourists and a funfair.

Pebbles/big sand! Sorry. There’s food and drink venues to the West of the Pier toward Hove. It is quite a nice walk once you’re through the busy bit. In the opposite direction you’ll see some grand regency houses as you walk up the hill.

Home to great independent shops. Some of which you can’t work out how they survive. Terrific Cafes. Excellent pubs.

Between the North Laine and the sea is a warren of streets, known for jewellery and slightly a more boutiquey shop. As you end up toward the sea… restaurants.

Walk straight from the station to the sea and as you walk over the main crossroads, you’ll find West Street. A blight on central Brighton featuring spray-clean chain pubs frequented by stag (bachelor) and hen (bachelorette) parties. There’s dual carbuncles of an Odeon cinema & the Brighton Centre at the end of the street by the sea.

Slightly drab mall in the centre of Brighton, there’s an Apple Store if you need anything! The main shopping street continues west where without noticing you’ll suddenly be in Hove.

Grassy area just north of the North Laine. Skate park (lookout for men who are ‘far too old to be dressing like that’) and massive children’s play area. 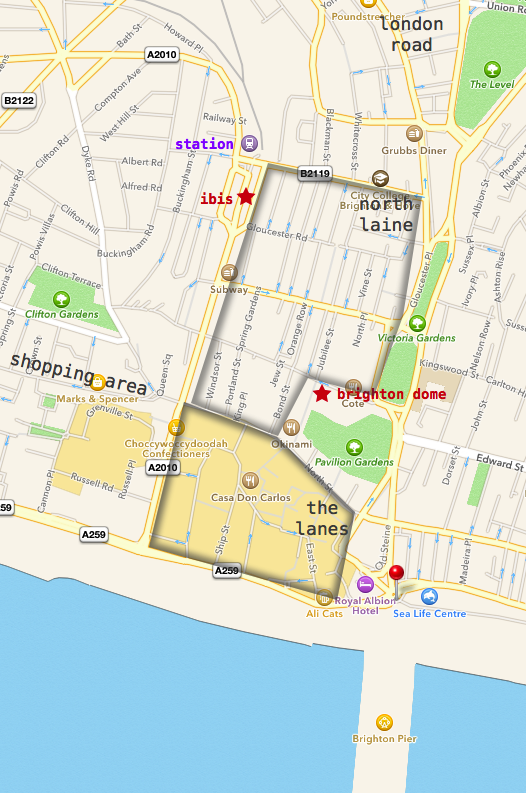 And there’s the regular standby of Yelp: their coverage seems pretty accurate.

We have all the decent chains: Bills (before it was a chain), Pho, Pizza Express, Wagamamas, et al. All within reach of the venue.

And we obviously have our fair share of Subway, Starbucks, Costa, McDonald’s and KFC. But… you can eat really well in Brighton.

A couple of personal recommendations:

And of course your average pub food in Brighton is pretty great.

Sussex has a strong brewing (proper ales, not lager) tradition. Now I’m in my forties that’s what I’m allowed to drink.

Harveys is the local brewery (based in next-town-along Lewes) and other smaller local brewers include Long Man and Dark Star.

We have some cash put away at the Dome for after-conference drinks, but if you want to move on there are tons of pubs within 5 minutes walk. Pick one, sit in it, you’ll probably like it.

You’ll be able to walk around town! Despite the hills.

If you want to go further afield we have decent buses. Also Thrifty Car Rental are near the station. You can also hire cars by the hour with City Car.

Cabs are plentiful near the station at all hours.

You can catch a bus (79) from town to Ditchling Beacon and walk along the ridge looking down onto Sussex. Beautiful in the summmer.

There’s plenty of walking in the wider South Downs National Park as well.

Lewes is about 15-20 minute drive north and east along the A27. Nice old town, home of Harveys brewers.

Alfriston is under a half hour east and is one of the best preserved medieval hamlets in the UK. Recommend the food at The George Inn and a cream tea by the bus stop. Good walking around there too.